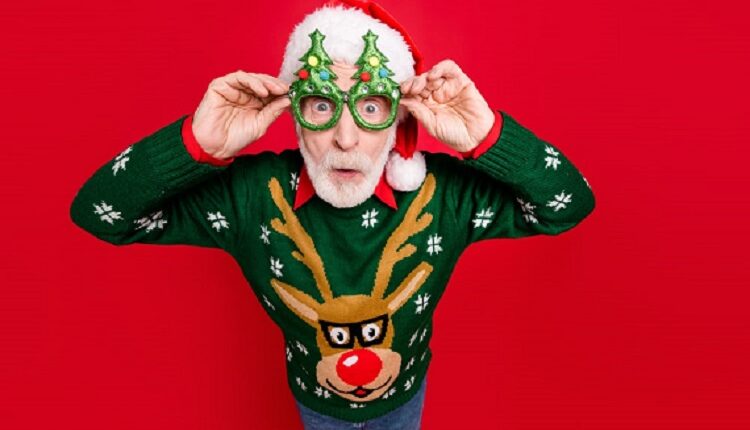 It’s Time for a New Holiday Tradition: The Ugly Sweatshirt

The birth of the ugly Christmas sweater party is credited to two Canadian guys who held the first such bash in Vancouver in 2000. Truth be told though, ugly Christmas sweaters date back to the 1950s. They have had their ups and downs over the decades, like most fashion trends, and now they are back. Well, perhaps it’s time for a new holiday tradition: the ugly sweatshirt.

The original ugly Christmas sweaters were a 1950s replacement for the sport coat and tie. They were a more casual option for adults who wanted to go to Christmas parties looking a bit dressed up without donning formal wear. And yes, they were purposely designed to be bold and somewhat bawdy. Back then, such styling wasn’t considered ugly. It was the ‘in’ thing.

Today, it is a joke. In fact, the ugly Christmas sweater has been a joke since the 1980s sitcom era. And that brings us back to suggesting a new holiday tradition of ugly sweatshirts.

Festivus for the Rest of Us

Have you ever heard of the Festivus holiday celebrated on December 23? If so, you are probably a big fan of the Seinfeld TV series from the late 80s and early 90s. While the original Festivus was a holiday invented by a single family and celebrated as early as the 1960s, Seinfeld writers latched onto it for an episode that aired in 1997.

Festivus has since taken off as a legitimate holiday alternative to Christmas, Hanukkah, and Kwanzaa. It is for people who don’t have a culturally or religiously significant holiday to celebrate in late December.

What makes this important is that the original family holiday was never meant to be shared publicly. But then Seinfeld made it a cultural icon. It has now become a legitimate holiday recognized around the world by people who want a December alternative. That brings us back to ugly sweatshirts.

Enough of the Sweaters

It is often said that a sweater is something you wear when your mother is cold. Whether or not that’s true, Christmas sweaters are so yesterday. In general, sweaters are not worn as frequently as they used to be. Sweatshirts are another story. What began as a piece of athletic clothing is now a mainstay in many American closets. It is time to bring those sweatshirts out of the closet and incorporate them into the holidays.

It Wouldn’t Be Too Hard

It wouldn’t be too hard for Americans to make their own ugly sweatshirts, according to the good folks behind the New York City-based Plurawl brand. Plurawl creates LatinX T-shirts, sweatshirts, and other apparel for the LatinX community. Though they choose not to, they could produce ugly sweatshirts for the holiday season without much effort.

Modern printing technology makes it a snap to design and produce sweatshirts and T-shirts. And just about anyone with no artistic ability can create an ugly design perfect for holiday sweatshirt parties. How hard could it be? We all know what ugly looks like. Putting it down on paper should not be too much of a challenge.

In the spirit of all things Festivus, it’s time to introduce a new holiday tradition based on ugly sweatshirts. Sweaters have had their day in the sun. It is time to let them retire and move on to something a bit more modern.

How to look great in a Plus Size Sweater Dress?

How To Find The Right Abaya For Yourself?